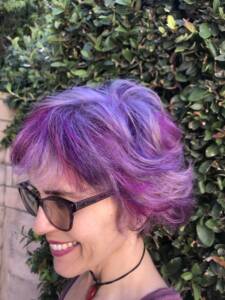 Back when I was Wendy Weisberg (which rolled off the tongue much more easily!), I started my career in 1992 at I.R.S. Records where I assisted with national media campaigns for a diverse array of artists including Kirsty MacColl, Black Sabbath, dada, Ozric Tentacles and Pato Banton.

From I.R.S., I oversaw press and video for boutique independent label Alias Records, picking up the campaign for the Archers Of Loaf’s critically acclaimed release Vee Vee.  A West Coast PR position for Sony-owned Relativity Recordings followed, and I began working on campaigns for Our Lady Peace, Govt Mule and Edsel.

A move to Virgin Records in 1996 enabled me to introduce national media to Sneaker Pimps, Daft Punk and Gomez, all of whom went on to become press darlings. I also had the honor of working on Massive Attack’s stunning release Mezzanine and earned a Gold CD plaque for my PR efforts on Blur’s self-titled album, the band’s only album to date to achieve RIAA Gold Sales status.

Always up for a new challenge, I took on a National Director position at Disney-owned Mammoth Records where I spearheaded press activity for UK dance act The Freestylers and assisted with Joe Henry’s Fuse campaign.

In the fall of 1999, websites were booming, particularly in the music arena. I took a Director of Marketing and Promotions position at Launch.com, before the company was purchased by Yahoo! Inc.  At Launch, I programmed radio stations in a variety of genres, acquired exclusive downloads and videos for the site as well as orchestrated unique contest promotions for a vast number of artists, including Beck, Foo Fighters, Eve 6, Mos Def and LTJ Bukem.

I started my own company in January 2002 and have worked with several clients including Creedence Clearwater Revisited, Sir Mix-A-Lot, Michael Franti and Spearhead, Paul Westerberg, The Wedding Present, Johnny Marr (The Smiths, The Healers), Mickey Hart, Universal Music Enterprises and a host of very talented independent musicians including Camille Bloom, Kimm Rogers, Beth Thornley, Paul Manousos and many more.

Throughout my career, I have worked with and procured coverage for clients from a wide variety of media including national print publications, regional dailies and weeklies, websites, radio syndicates, television and NPR.

If you are ready for a results-driven PR pro who is creative and innovative please contact me . I’d love to hear your music and discuss your projects.